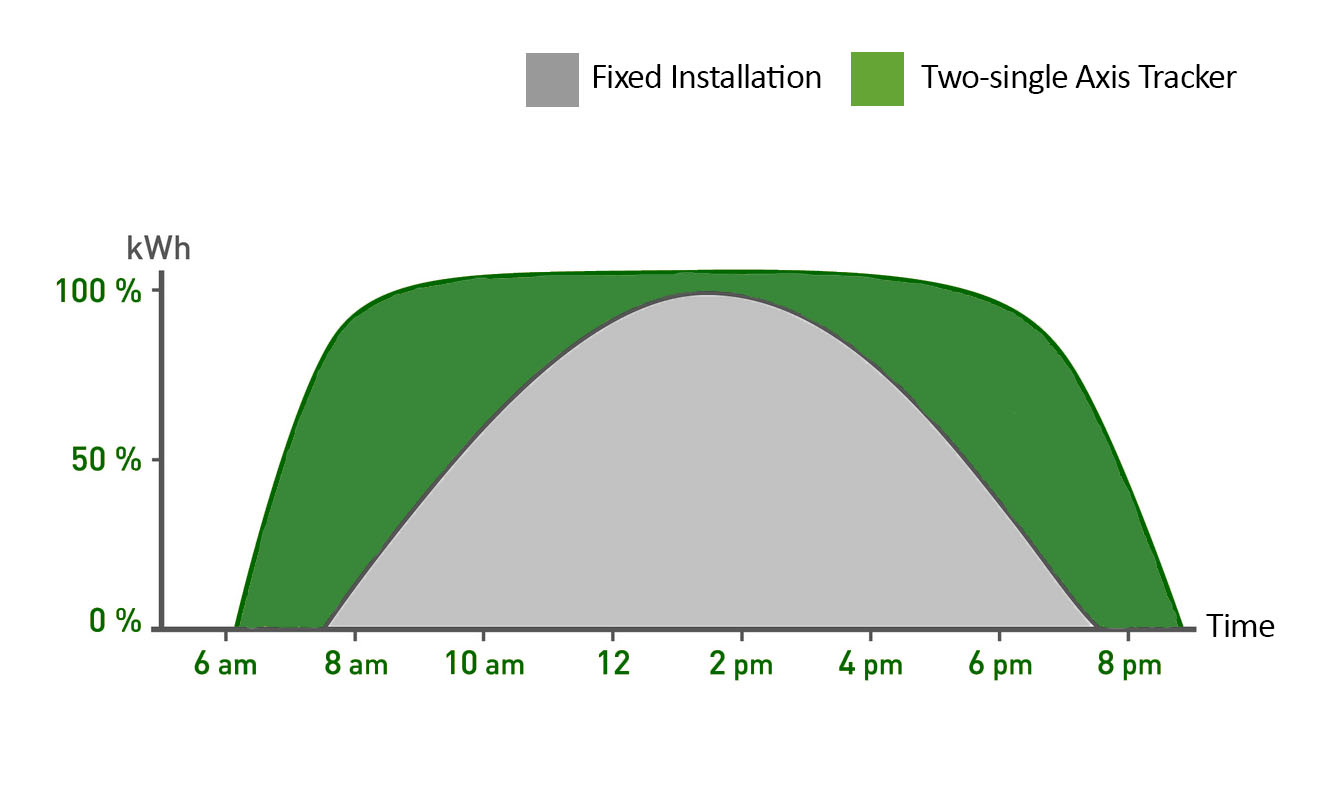 The use of solar trackers is increasingly common in photovoltaic plants, since solar industry has proven the great benefits they have. The trackers allow a significant increase in energy production and therefore improve project profitability.

Before further explaining the objective and the operation of solar trackers, it is essential to explain the movements of the sun and to understand how they directly affect the production of solar energy.

Rotation and translation movements are the responsibility of the seasons, the succession of days and nights and the temperature differences around the world. Solar radiation depends on these movements and will change depending on the latitude and the time of the year.

Sun’s position, directly affects the angle of incidence of the sun, and is determined by the elevation and azimuth angles. 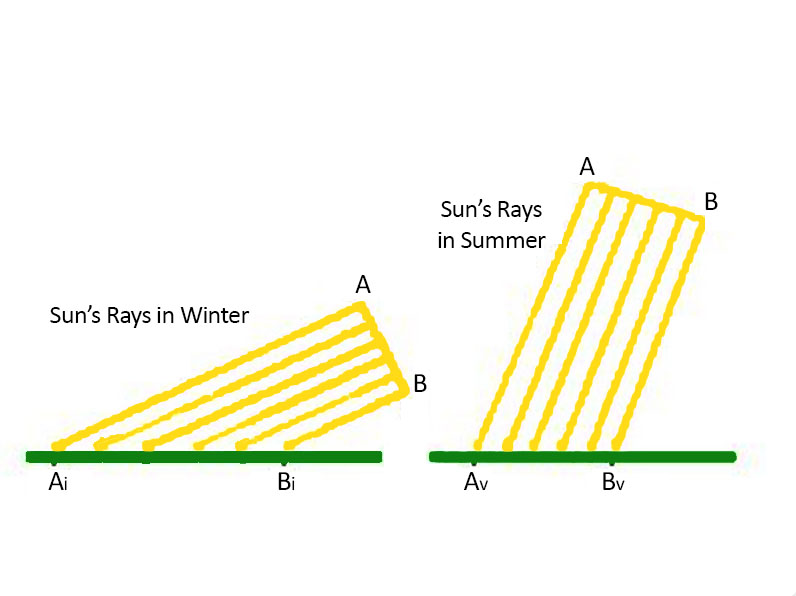 This image reflects the incidence of sun’s rays at noon and on a horizontal surface in winter and summer. As we can see, in winter the slope is maximum and the energy power of sunlight is minimal. In addition, due to the rotation, the sun is low in the sky and is visible a few hours a day.

On the other hand, in summer, the sun travels through an orbit that makes it to be higher in the sky and to remain visible more hours a day. So, the sun's rays fall more perpendicularly and with much greater energy efficiency.

This effect is accentuated the further you are away from the Equator line. So, in regions near the polar circles, days are longer in summer and shorter in winter, while in other areas closer to Ecuador, there is much less variation between the length of night and day.

Thus, daily and annual solar trajectories of a location vary depending on the latitude, and they directly affect the angle of incidence of radiation, which is a key point in producing solar energy: the higher the angle, the greater production. Therefore, it is essential to know the exact orientation and inclination of our location, in order to guide the panels of our installation so that we can maximize solar energy.

PVGIS is a very useful tool to calculate the slope needed for your photovoltaic installation based on your location. The application also allows you to compare the production you can get according of your type of installation (fixed, single-axis trackers or two-axis trackers).

Click here to calculate the energy you can produce depending on your location and your type of installation.

Types of solar trackers and its benefits

Solar trackers are composed of a fixed part and another movable, with the objective of following the sun’s movement and of orienting the PV modules perpendicularly to the sun. Thus, you can increase the collection of solar radiation and consequently the energy supplied by the installation.

There are two main types of solar trackers depending on its movement.

- Single axis: the rotation is done on a single axis, which can be horizontal, vertical or oblique.

- Two axis: besides moving along the azimuth, they also follow the elevation angle of the sun, thus achieving a full tracking. 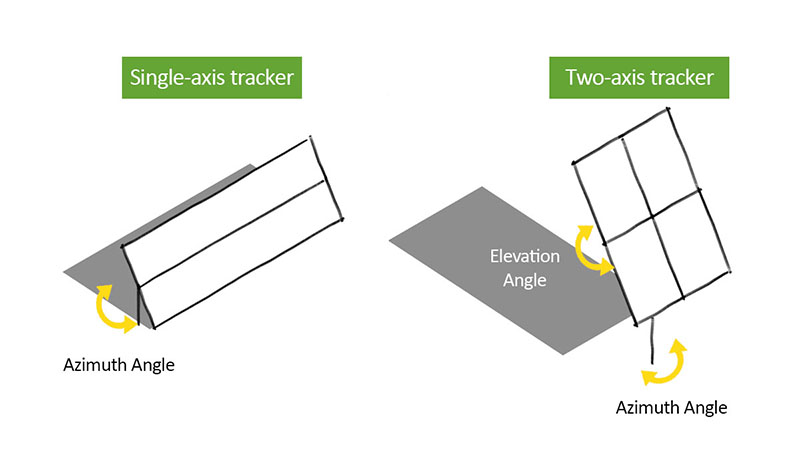 Thanks to these moves, you can increase the production of electricity with respect to fixed installations up to 30% with single-axis trackers and up to 40% with two-axis trackers.

At this point it is clear that through the movement of the trackers it is greatly increased the amount of radiation received by the panel and consequently the energy produced. In the following graph we can see it better.

As we can see, the panels fitted with solar trackers have received more solar radiation, and therefore have produced more energy throughout the day. The performance has increased about 40% compared to the fixed installation.

Another very important aspect to emphasize is that thanks to solar tracking not only the production of energy increases, but also improves the way the power output is delivered. With solar tracking you can extend the time of available maximum power and thus produce with greater capacity more hours a day.

Let's go back to last picture to understand this concept. In the dark curve we see an evolution of the power output throughout the day, it gradually increases until peaking at noon, then returns to decrease. But, in the green curve, we see how we approach the maximum power from early in the morning and that this production is maintained until late afternoon.

Let’s give an example. If we have installed a solar pumping system that to operate need its panel working at 75% of their capacity, with a fixed installation, the system will only pump about 4 hours a day (in the hours of highest solar radiation) while with PV trackers, it will pump up to 10 hours.

At Valldoreix Greenpower we have developed our own solar trackers with plug and play systems and a unique technology that ensures reliability and high efficiency. VGP PVAST 098, VGP PVAST 196 and VGP PVAST 327 are our two-axis trackers and VGP PVHT 2106 is our single-axis tracker. We have a great experience designing PV projects, and we are able to adapt to your need so that you optimize your installation and obtain the highest possible efficiency. 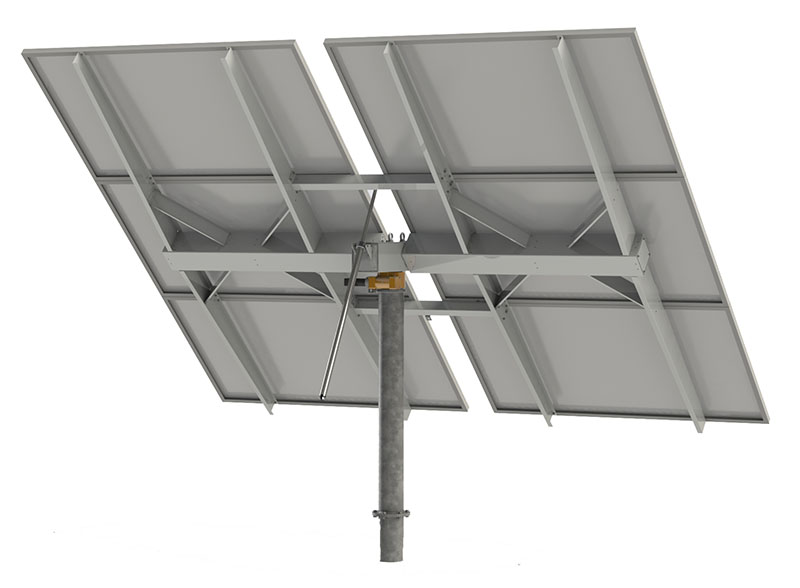 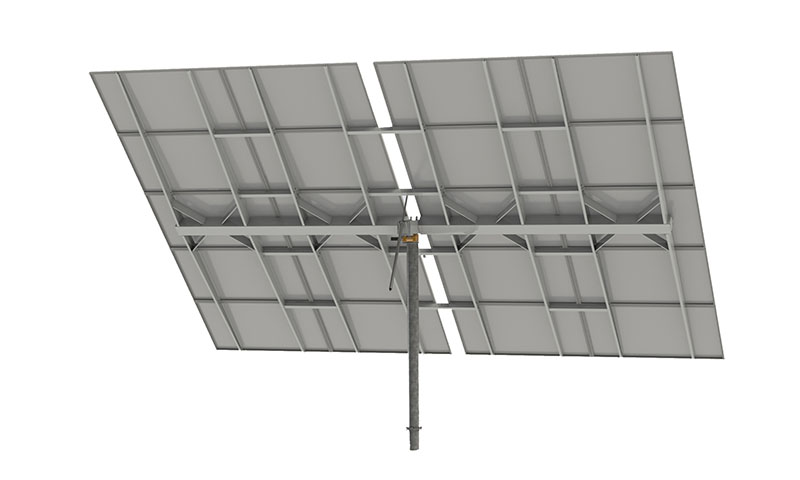 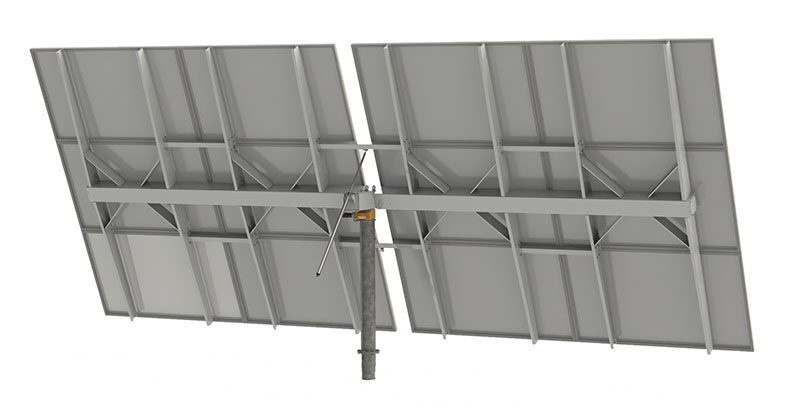 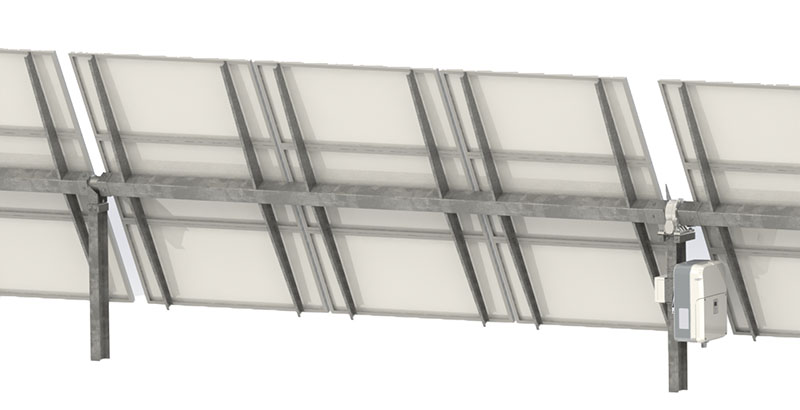